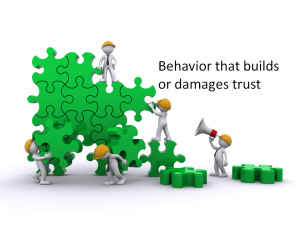 Trust. Workplace trust. Team trust.  It all boils down to how trust expresses itself in your workplace.

Most of us know how having it (or not having it) in the workplace feels like.  We know how many managers pay lip service when asked.

“Of course, I trust my team!  They were hired because of me!”

But oftentimes, the truth can be gleaned from turnover rates, exit interviews, and even productivity.  Numbers are low. It takes a while for projects to move to the next phase.  Some tasks need to be redone.  Team members need to be closely monitored.  Worse, there seems to be no end to the hiring process.

“Why do we end up with unproductive employees?”

“I certainly didn’t see this ‘tude during the interview…”

“Why do my team members quit after less than a year?”

If this sounds like you (or someone you know at the workplace like … your boss), then you might find something worth taking home in this book.

Becoming TIGERS – Leading Your Team to Success isn’t your run-of-the-mill book on team dynamics.  In fact, it doesn’t read like one.  The book centers on a children’s story, The Tiger Lord’s Trials, and the characters Daddy Derek, mom Martha, and daughter Raven who were tasked to read the book for a school assignment.

The children’s narrative is about the story of two tigers who led their own tribes. Both tiger leaders worked towards the same goal of protecting their members and everything in between.  But while their goals were the same, the tigers, Kali and Ashoka, were poles apart.  Kali was feared.  He took care of his tribe and no one went hungry, but no one seemed happy.  Ashoka, on the other hand, was revered and loved. Like Kali, he took care of every last animal under his care but his tribe seemed to have more food, bigger homes, and well… happier animals.

Why the difference?  The answer was TRUST.  One tiger leader learned to trust his tribe more than the other.  In return, his tribe trusted him.

Not coincidentally, Derek has been facing what seems to be a parallel universe at his workplace …

The similarities were so close to home, it made Derek wince at the thought. He saw himself at the office, yelling at his staff to move faster.  He had been driving everyone to meet deadlines. But no matter what he did, everyone seemed stuck.

Reading the book with her parents was Raven’s homework.  But it’s pretty clear that her dad benefited more from the story.

“ … Taking a deep breath to steel himself, Derek answered the final question.

As the boss of a team of employees, I’ve noticed there isn’t a drop of trust left at the office. There are probably other areas of my life that need more trust, but work is at the forefront of my thoughts right now…”

In your workplace, perhaps you know someone like Derek. If so look to the team turnover rates, exit interviews, and even productivity problems. If you find them, here is a way to Learn more … 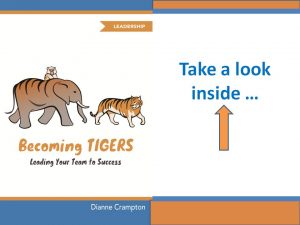