Is Empathy Genetic and How Does It Affect the Workplace? 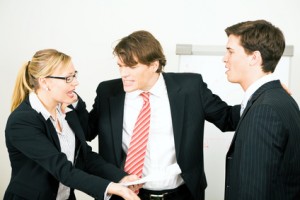 Empathy…just how critical is it in the workplace?

It can make or break organizations.

Through research I conducted at Gonzaga University, I studied all the group dynamic research I could find in business, education, and psychology. From the studies, six principles that build high levels of cooperation and collaboration in teams surfaced. These principles are trust, interdependence, genuineness, empathy, risk and success.

These six principles form the acronym and foundation of the TIGERS® Success Series. The best part is… these principles, including empathy, are anchored in measurable behaviors and business results.

From psychological research conducted by Sarina Rodrigues Saturn, an assistant professor of psychology at Oregon State University, there appears to be a gene variation that affects empathy and stress. Individuals identified with the GG version of the gene tend to be more pro-social defined by researchers as the ability to behave in a way that benefits another. In contrast, the carriers of the A version of the gene (AG or AA genotypes) tend to have self-reported, lower levels of positive emotions and empathy.

Through my own case studies and research, which is the foundation upon which the TIGERS Team Wheel (a high impact group facilitation and development resource for leaders to use in building their teams) was developed, empathy – or lack thereof – can determine an entire organization’s culture.

Empathy is a universal team value that promotes high commitment and cooperation in the workplace. It is the ability to understand another person’s perspective or circumstance whether you agree with this person or not. Empathetic people are curious and possess a desire to know and understand others. Empathy is important to successful conflict resolution because understanding diverse perspectives allows collaborative solutions to rise from chaos.

Likewise, the ability to project your imagination into another person’s circumstances or world view lays the foundation for moral decisions and is a condition for peace. Without empathy, teams lack trust and respect in each other and their leaders. By participating in the TIGERS Team Wheel facilitation process, organizational issues, concerns, and communication patterns are revealed in a non-threatening way in less than 60 minutes of play. Those who lack empathy often appear with a “winner takes all” attitude no matter how the “win” is attained.

With people who display deficient  empathy in the workplace you find:

— Dominating personalities that control conversations resulting in other team members disconnecting… a very common problem in the workplace when members are not allowed to contribute.

— Power play struggles by withholding information and resources from others…a major obstacle to your company’s efficiency and bottom line.

—  An “us versus them” mentality emerges

Does a gene variation alone play a major role in the lack of empathy – maybe, maybe not. There are many other forces in play, both genetic and non-genetic.

Sarina point out in her study: “the exact way the gene affects the biology of underlying behavior is still poorly understood and remains a topic of inquiry. I for one, believe that people can and do overcome their genes all the time.”

So how does an organization increase the level of empathy in the workplace?

It starts with the organization’s leaders. Through coaching, training and team development goals, empathy can be developed and enhanced.

— Teach listening skills. To understand others, team members must be good listeners. Skilled listeners let others know they are heard  and express understanding of issues.

— Be selective during the hiring process. Organizations are learning to make their selections based on character, communication skills, and willingness to work in a collaborative team environment for the success of the organization as a whole. They look beyond the “resume credentials” and ask open-ended questions to determine character, negotiation skills, and the willingness to work in teams.

— Recognize your employees – they are human, not machines! A thank you or small token of appreciation such as a note goes a long way.

If  there is a genetic disposition toward empathy, skills can be taught to improve how the workplace operates. Be careful, however, to screen for the ability for new employees to self reflect and correct their own behavior. Because a total lack of empathy results in empathy related disorder and caring about others will be disregarded for self gain.